I am an experienced chamber musician and have played in a huge variety of chamber ensembles, with my specialty being wind quintet repertoire.  I have performed regularly as a member of a wind quintet since 2001 – founding a group in the Royal Scottish Academy of Music (which won a Tunnell Institute Masterclass Prize) was a member of the ‘Kensington Quintet’ at the Royal College of Music, and then in 2010 founded ‘QuintEssência’  with members of the Orquestra Metropolitana de Lisboa and freelancing professionals (picture above).  This group has played to several sold-out concert venues and have had particular success with their children’s concerts series.

I have also played in a diverse range of other chamber ensembles, having performed Copland’s ‘Quiet City’ for trumpet, cor anglais and strings, several baroque concertos including those by Marcello, Albinoni and Cimerosa, the nonets by Martinu and Spohr, the 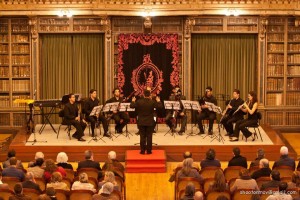 piano quintets of Mozart and Beethoven, and most of the better-known quartets and quintets for oboe and strings – including those by Mozart, Britten, Bax, Martinu, Jacob and Francaix.  In 2011 I joined the Double Reed Ensemble of Portugal – Ensemble Palhetas Duplas (left) for a world premiere written and conducted by Jean-Sébastien Béreau.

I am now in a trio ensemble, working for Live Music Now, called Winds of Change.  We all play various instruments – our pianist also plays flute/piccolo, bassoon with clarinet/saxophone and myself on oboe/cor anglais/piano. We bring fun interactive music to schools, hospitals and nursing homes, as well as concert venues so please do contact me if this is something of interest to your institution.